OSCE talks to focus on fresh plans for European security

Foreign Ministers are meeting in Helsinki (Finland) to discuss proposals for improved European security and ways to avoid conflicts like the one in South Ossetia. The Organisation for Security and Cooperation in Europe (OSCE) will concentrate on initiatives put forward by Russia and France.

Conform Russia Today, Russian Foreign Ministry spokesman, Andrei Nesterenko, said: “We shall voice support for continuing the process of reforming the organisation so as to turn it into a valuable and efficient international organisation, including for adoption of its Charter and drafting collective rules in the sphere of monitoring elections and adjustment of the operation of field missions”. Discussions targeted analysis proposal for a treaty on pan-European security while possibly inviting other treaty organisations into the mix and a possible restructuring of the OSCE.

Remember than at end the last month, in Geneva, the European Union, the United Nations, and the Organisation for Security and Cooperation in Europe (OSCE) co-chaired the talks about Caucasus security. The talks involved Russia and Georgia, while South Ossetia and Abkhazia took part in the discussions for the first time. On this occasion, Mr. Pierre Morel, EU Special Representative for the Georgia said : “that the situation in the Caucasus remains unstable. Shootings and abductions have been reported along the border between Georgia and South Ossetia after the armed conflict, with the sides blaming each other for continuing violence”.

Posted on October 21, 2008 | Leave a comment
In an interview given last week from the NY Times, Mikhail Saakashvili demonstrates again how funny can be backstage policy world with a character as he. Here’s an excerpt and link to the interview can successfully treat “depression” of a late autumn dayQuestions for Mikhail Saakashvili
An American Friend
Published: October 17, 2008 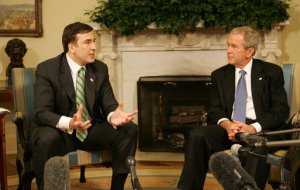 “- Have the Russians made any attempts on your life?
– President Medvedev has called me “a political corpse” publicly several times. Putin told several Western leaders, “I want Saakashvili’s head.” If they want my head, for me it’s more funny than troubling.

– Are you connected to the C.I.A.?
– No. I told President Bush two years ago that I am sick and tired of trying to convince Putin that I am not a C.I.A. officer. I said: “Mr. President, can you tell him I am a C.I.A. officer? Maybe he will take me more seriously.”

If recognition by Moscow independence South Osetie  and Abhaziei, Americans have decided to respond infantile, threatening to recognize the independence of several counties and municipalities and “ships aid” with a calibre appropriate, for tried Georgian population, nor the Russians not remain in debt. So they go where they have been. That is in those areas where Bush ‘s loved as cholera. I ask now is not Cuba (although it seems and there are walking some advisers to Prime Minister Putin’s) but Venezuela’s friend. Non-s missiles, are bombardiere TU-160. However everything I try a sense of deja vu.

Americans move Kosovo in Pakistan and support India’s nuclear program. Foolishness and arrogance that haven’t limits on this planet, is proven a new starlet to American policy, Sarah Palin. What would war in the White House kitchen with the Russians. Competed successfully (I take blame for some of my readers) by Dmitri Medvedev. That between two meetings peace with Sarkozy would war with NATO !

Adding two things faine. First interesting about the new alliance and Russia – Syria. This is to see that the Russians have with whom. Then they find quick and with what. The question remains: where? Question with several variations of response.