Prime Minister Vladimir Putin was in Paris for a two-day working visit. Before the visit’s formal events got underway, he had breakfast with former French President Jacques Chirac, held restricted-attendance talks with French Prime Minister Francois Fillon and participated in the 14th meeting of the Russian-French Commission on Bilateral Cooperation at the level of prime 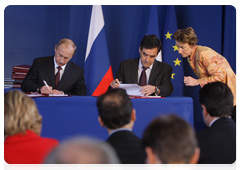 ministers. Prime ministers Putin and Fillon met with top managers from both Russian and French companies, signed the summary document of the 14th session of the Russian-French Commission and gave a joint press conference.

In a successful trip that worried Russia’s nervous neighbours, Putin also secured French investment to save the struggling Lada car maker and a promise that France will consider selling Moscow a huge amphibious assault ship.

I will return with an analysis on this subject.