Rosneft and ExxonMobil – new steps towards implementation of strategic cooperation

The Russian state company Rosneft and US Exxon Mobil Corporation signed another deal in first week of December 2012, a new sign for mutual project called a  “Pilot Development Agreement”, according to the deal both of them will assess the opportunity of commercial production of fixed oil reserves at Achimov and Bazhenov in Western Siberia.

The agreement was signed by Igor Sechin, president and chairman of the management board at Rosneft, and Stephen Greenlee, president of ExxonMobil Exploration Company. Rex Tillerson, chairman and chief executive officer of Exxon Mobil Corporation, was present for the signing, as well as the senior management of both companies. The document is another step towards implementation of the long-term strategic cooperation agreement the companies signed in 30 August 2011.

“The companies will set up a joint venture to run a pilot program and potential commercial production with equity interests of 51 percent for Rosneft and 49 percent for ExxonMobil. Work will be carried out at Rosneft’s 23 license blocks covering a total area more than 10,000 square kilometres. Rosneft and its production subsidiaries will provide staff and access to existing infrastructure. ExxonMobil will provide financing of up to $300 million for the pilot program, as well as state-of-the-art technologies and specialists in geology, development and well engineering and completion. ExxonMobil will also provide production management services for drilling complex horizontal wells so as to evaluate and commercially develop these tight oil reserves” it says in the press release of Russian Company. Upon completion of the pilot program, Rosneft and ExxonMobil will jointly select blocks for commercial development in 2015. The two companies will draw on their technical and production experience to ensure commercially viable development and potential production growth in Russia’s West Siberian basin.

“Maximising production efficiency at every field and exploring new technologies to exploit the potential of tight reservoirs is a strategic priority for Rosneft” said chief of Rosneft, Igor Sechin. “I am certain that our experience and infrastructure in Western Siberia, coupled with the state-of-the-art technologies of our partner ExxonMobil, will allow us to begin developing large tight oil reserves.” 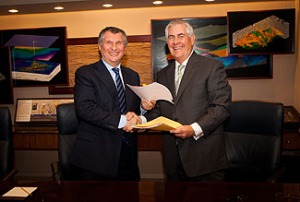 Also, a few days later, ExxonMobil and Rosneft signed a Declaration on Protection of the Environment and Biodiversity for Oil and Gas Exploration and Development on the Russian Arctic Continental Shelf. The declaration was signed during a meeting between Igor Sechin, Rosneft president and chairman of the management board, and Rex W. Tillerson, chairman and chief executive officer of Exxon Mobil Corporation, and senior managers from both organizations. The declaration sets out measures to help protect the Arctic’s ecosystems during oil and gas exploration and development activities to be undertaken by Rosneft and its partners. Commenting on the signing, Sechin said, “Rosneft and ExxonMobil have worked together effectively for quite a long time. I am grateful to Rex Tillerson for the decision to join the initiative.”

PS: Recent, US oil and gas company Exxon Mobil Corphas announced it is to begin exploration activities on the east coast of South Africa.