Barack Obama and his second term in the White House

Presidential elections in the United States have generated stormy debates pro and against the two candidates. Global relevance of these elections not must be proved, though not always Americans choices mean significant changes in U.S. policies towards different regions of the world. And then there was my little surprise to find that in many cases strong argument in favor of Republican Mitt Romney was represented by the need coming to power of a politician to impose order and mighty “to put in corner” enemies of America. The acme of irony, but such an argument invoked also the supporters of Vladimir Putin in the Russian presidential elections, when the Eastern giant clam return from planetary powers, issue which outraged the West. Double extent hypocrisy continues to be an instrument inseparable from the policy, but this is already another discussion.

Returning to the victory of Democrat Barack Obama, we can not to avoid to remark that even the most democratic country in the world has experienced themselves with accusations of election fraud, the organization Truth Vote announcing that holds the arguments and evidence that there were irregularities in voting process. Personally, I believe that an argument of type “no American president in office in the last 60 years, has won a second term as large percentage of the unemployed” is insufficient, however would endeavor sociologists to demonstrate the standard patterns of behavior of groups of voters. Moreover, I reiterate an old idea, saying that many of the flaws of present society is based on standard sociological calculations inoculated of human behavior. And last but not least, the option of voters depends crucially on the proposed alternative opponent. American Society is enervated of crisis, tired of foreign military intervention, with fewer possibilities for the mass of voters to see the long-term perspectives. Obama’s proposed economic plan seems to be more or less logical (not necessarily reliable). From this point of view, is interesting to note the reason why no independent analyst approved Romney’s plan. Because it has no economic sense, they said. Certainly both plans have positive points. Important is whether their application will generate stability and growth. Most economists are skeptical about it. 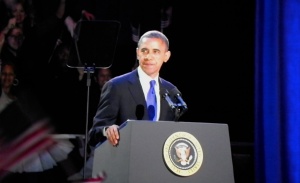 Invigorated by his electoral triumph, President Obama started to use some new political capital – acquired (through the obtaining of an additional term in the White House) with a public appeal to Congress to try to prevent imminent ‘fiscal cliff ‘ that the United States will face if by the end of year will not come to an agreement in Congress, that remained divided between Democrats and Republicans on debt reduction plan, and on raising taxes paid by the wealthiest Americans, while Obama ensuring population that tax obligations incumbent on middle class will not increase. Republicans and Democrats are forced to reach an agreement on the budget, even temporarily, before the end of this year, when it will materialize “fiscal cliff”. The term designates immediate increase taxes and reduce overall public expenditure which will automatically enter into force in January, according to a law voted in 2011. From the presidential desk in the White House, President Obama said, “it’s time to get back to work. The American people voted for … action, not for politica … as usual”. Concerning the main action domestically, Obama said: “We presented a detailed plan that allows us to make investments … while reducing the deficit of 4000 billion over the next decade.” Arguments wanted to signal its opening to find a compromise, Obama is well aware of election exit polls showed that most Americans agree with the imposition of higher taxes (in total disagreement with the Republican opposition) of who earn more than $ 250,000 per year. Note that two hours before the press conference of U.S. President, in a sign that Republicans do not intend to easily accept a compromise, the Republican chairman of the House of Representatives, John Boehner, reiterated opposition to tax increases for the richmen. With regard to those who would be affected by such a measure, the acid reaction came from tycoon Donald Trump, which characterized the election as a disgrace, an ordinary fake, a shame and urged Americans to start a revolution. Later, Trump has deleted most of insulting posts on his Twitter account. But it is difficult to quantify how many wealthy Americans have a similar view. Of course, those who did not already transferred their assets and businesses to fiscal paradises in different parts of the world.

Returning to the need for economic measures, we note that independent Congressional Budget Office (CBO) has warned the president that postponing the implementation of a plan for taxing beyond the end of this year would push the U.S. economy back into recession next year and unemployment will rises more than nine percent as it is now. Moreover, this could lead to tax increases for the middle class, which the Obama struggles to avoid. Moreover, he stressed that “the proposed plan to Congress could give hope to millions of families, 98 percent of Americans and 97 percent of small businesses need help to make sure that they enter the new year”. Incomes are declining and at least 12 million homeowners have mortgages that exceed the value of their houses. Consumers aren’t spending and therefore business is not investing. “This leaves government as the only possible source of substantial new spending to create jobs. Yet there is no jobs program” warns Huffington Post.

If compromise on the fiscal measures between Republicans and Democrats seem difficult, however on health insurance reform, known as “Obamacare” the two sides appear to have reached an agreement. Republican spokesman for the U.S. House of Representatives, John Boehner, said, quoted by AFP, that the Republicans will give up any attempt to repeal health insurance reform introduced by President Barack Obama and hated by his opponents, that must completely enters into force in the new political context. Balance of power on Capitol remains the same as before the election, President Obama have Democratic majority in the Senate are required to reach an agreement with Republicans which are majority in the House of Representatives. But…note that the Congressional Budget Office estimates that there will still be 30 million uninsured Americans by the end of the decade. Tens of millions more will be underinsured as the companies are free to raise their premiums and deductibles. Meanwhile, corporate dominated health care system will continue to be huge drag on our global competitiveness and long-term fiscal health.

Externally, Obama’s presidency first term marked the relocation anti-missile shield in Europe, resetting relations with Russia, a certain continuity of U.S. projects in the Black Sea, so before elections the initiated in military-political issues rather expressed the hope that things remain unchanged. While the reason of the mission in Libya remains questionable, no results were effective. With Libya’s peace and political integrity under question, it was an example that the viability of NATO as a transatlantic alliance is still foggy. At the end of 2011, the full withdrawal of combat soldiers from Iraq was complete, ending nearly a decade of bloodshed and violence. Sad war without losers and winners. The killing of Osama Bin Laden, Washington’s one-time ally, was widely appraised as a success. But the relative transparency about why it happened so late has made to more experienced observers to shake their head with disbelief, despite the popular approval. Iran remains a sore spot for American foreign policy. Obama maintained the sanctions regime on the country for its nuclear program and even extended it in concert with other international partners. The failure to open diplomatic relations with Teheran and make Israel accountable for its own nuclear weapons in the process makes this a severe weakness in Obama’s foreign policy.

Recent, U.S. diplomat spokesperson Victoria Nuland refused to comment on questions about international issues and their priority for the new U.S. administration after presidential elections. One thing is certain: the main intermediary between the White House and the international community during the previous mandate, Secretary of State Hillary Clinton will leave the Obama team after its reinvestment of January 20, 2013. Regarding to the seat occupied by Mrs. Clinton was considered the name of John Kerry, a former opponent of George W. Bush in the 2004 presidential election, and Susan Rice, the U.S. ambassador to the UN. Presence of the last on the list of potential successors as head of U.S. diplomacy has already produced some irritation to the Kremlin, knowing that Susan Rice has had several disputes with the Russian ambassador to the UN meetings about Moscow’s attitude towards the Syrian conflict, so that Moscow expected that “will be difficult” to work with Washington if Rice comes to power, according to sources inside the Foreign Ministry of Russia. However no relationship with Russia seems to require priority attention of the White House. In this regard there could be changes of tone rather than substance. Otherwise, it will remain anthological in the annals of diplomatic the conversation between Obama and former Russian President and current Prime Minister Dmitry Medvedev (when Obama asked shortly time, before the elections, because after he could be more flexible in dealing with Russia. Medvedev assured that Obama will submit his grievance to Vladimir Putin and Republicans have really made a fit of rage on the subject !). However, this does not seem to matter much in American decision to grant Obama a second term, except of course those with clear views rusofobe, but are far from decisive influence Washington’s relations with Moscow. On the list of future staff actions in Washington and President Obama continues to remain Syrian file and increasingly powerful Islamist movements in the Middle East, Iran and last but not least, already recognized public – U.S. special focus on the Asia-Pacific region and capacity of influence exerted here in all priority areas: economic, political and military.

Lanny Davis, a former advisers of ex-President Bill Clinton suggested in an editorial for The Hill that he believes that “Obama is expected likely to work more with lawmakers whether it’s fiscal problems or immigration reform, but especially it is likely to follow the model of the second term of his predecessor Clinton”. Can be this the explanation that the first person who called Obama after election results was Bill Clinton ?

Obama made his first comments on the widening scandal that led to the resignation of CIA Director David Petraeus, plus addressed upcoming negotiations with Congress on taxes and spending cuts. He also answered about attacks on U.N. Ambassador Susan Rice coming from GOP Sens. John McCain of Arizona and Lindsey Graham of South Carolina for her comments following deadly violence in Libya. Obama said the senators are trying to “besmirch” her reputation. Obama said also that there is no debate that there needs to be accountability after four Americans were killed at the U.S. Consulate in Benghazi, Libya. And he warned Sens. McCain and Graham again: “When they go after the U.N. ambassador apparently because they think she’s an easy target then they’ve got a problem with me.” He said he’s not yet determined whether Susan Rice is the best person for the Secretary of State job. Full transcript of Obama Press Conference can be read here.